Being a intentionally 100% remote office operation, our business at babaLucas is highly sensitive to internet connectivity. In my neighborhood, I know exactly where to go when I need a break from the home office. For years, I’ve been a Starbucks hater & AT&T hater.

AT&T hater because telephone copper wire-based internet just physically cannot handle today’s internet load – more on that in the future. Starbucks hater because they provide AT&T DSL as a service (Don’t get me started about coffee…to me Starbucks Coffee is like breaking down for McDonald’s and the like, our dirty little occasional secret).

I noticed this article on Mashable a few weeks ago that Starbucks had partnered with Google to provide internet in it’s new and high-demand stores. While generally I’m more into supporting my local cafes here in San Francisco, couple that knowledge with a free drink for my birthday and I was willing to test it out.

Having come back about 3 times and seeing this test midday on a Tuesday: 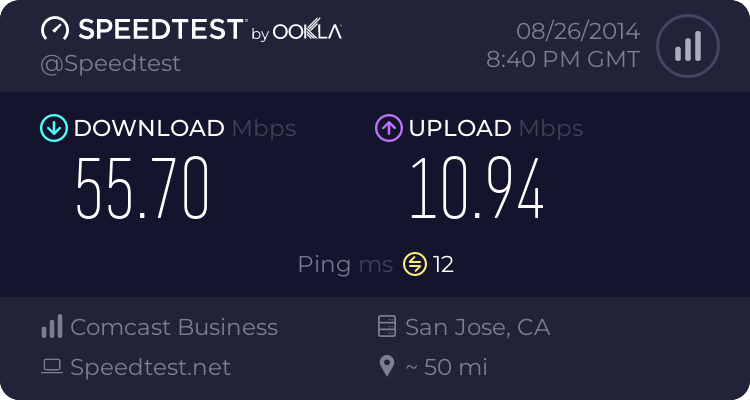 Starbucks is back in the rotation. If the graphic above doesn’t make sense, let me explain:
55.70 Mbps is BLAZING fast for a public wifi. Previously when Starbucks had AT&T DSL, you’d be lucky to get 0.5 Mbps. Forget what Mbps is…just know that 55.70 is 1,114 times FASTER than 0.5.

I’ll still keep my local guys first; but they’ve now got to pony-up. No DSL & no aging + failing routers.